As the days get shorter, I find my energy level waning. Many suffer this time of year from seasonal affective disorder due to the low light and short days, me among them.

``Seasonal affective disorder (SAD), also known as winter depression, winter blues, summer depression, summer blues, or seasonal depression, is a mood disorder in which people who have normal mental health throughout most of the year experience depressive symptoms in the winter or summer, spring or autumn year after year.`` (Wikipedia)


This time of year hibernation seems like a great idea; I think that nature intends us to get more rest and take it easy this time of year. But with the Christmas season fast approaching how is that possible? Instead, I'll have to get as much outside time as the weather permits, I find this helps me, and take some extra vitamin D (the sunshine vitamin); it is only another three weeks until the days start getting longer.............

Speaking of murder, it is also a collective noun for a group of crows. 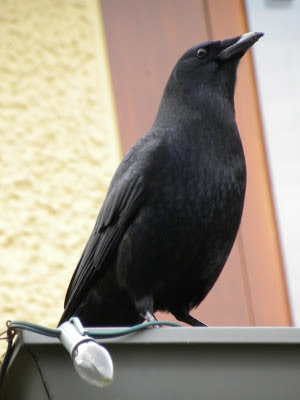 Crows are members of the  family Corvidae, forming the genus Corvus.

``The crow genus makes up a third of the species in the Corvidae family. Crows appear to have evolved in Asia from the corvid stock, which had evolved in Australia. The collective name for a group of crows is a flock or, more poetically, a murder.`` (Wikipedia) 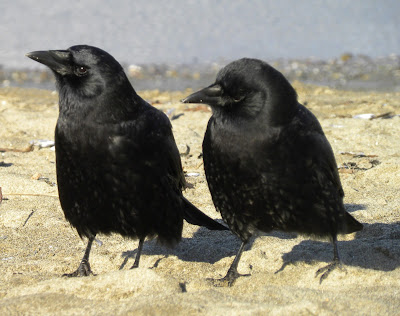 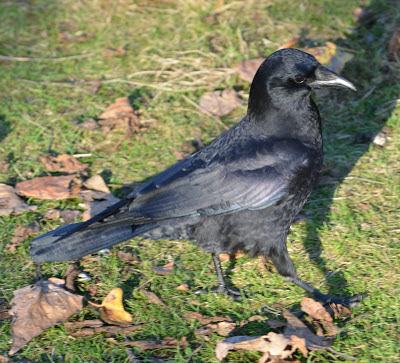 Crows are very smart birds, they seem to recognize faces, so if you slight them in some way they will remember. I heard a story about a man who found a dead crow on his property, he picked it up and threw it in the garbage can. Not a crow friendly act, because for a long while afterwards whenever he ventured out of the house the crows would dive bomb him, they did not threaten anyone else coming or going from the house  or in the neighbourhood.

``Recent research has found some crow species capable not only of tool use but of tool construction as well. Crows are now considered to be among the world's most intelligent animals. The Jackdaw and the European Magpie have been found to have a nidopallium approximately the same relative size as the functionally equivalent neocortex in chimpanzees and humans, and significantly larger than is found in the gibbon.`` (Wikipedia) 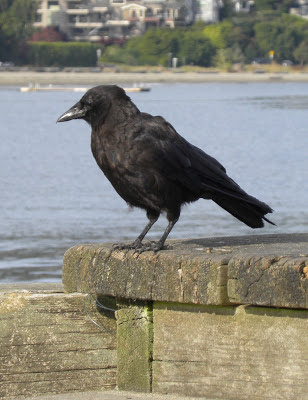 This one is goose stepping down a local dock. 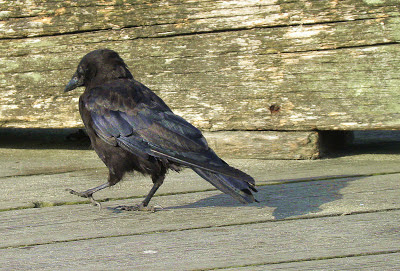 They watch what is going on carefully. 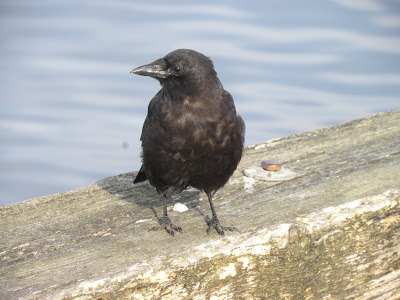 Always alert for a tasty morsel. 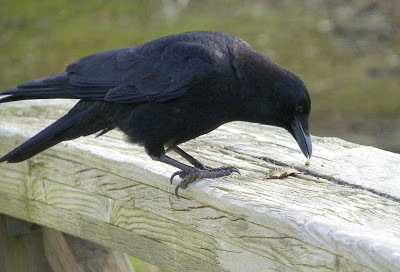 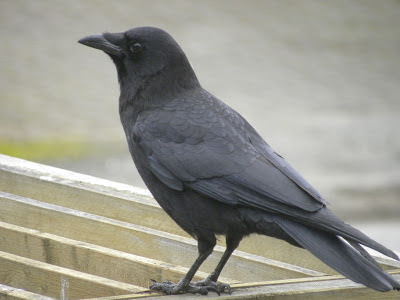 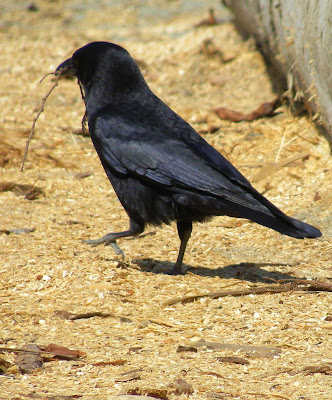 At my house the crows rob the suet feeder: it doesn`t seem to matter how I try to secure it so that only the small birds can approach it the crows are up to the challenge (You can see suet on the end of this crow's beak). 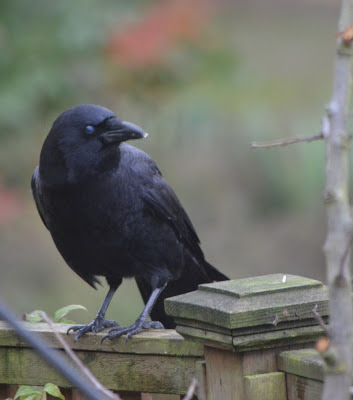 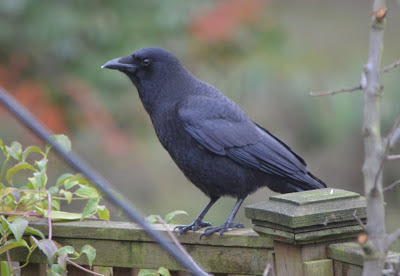 Anyone feeding the rabbits in the local park also supplements the crows diet. They seem to have a great sense of timing, showing up just as the meal is being delivered. 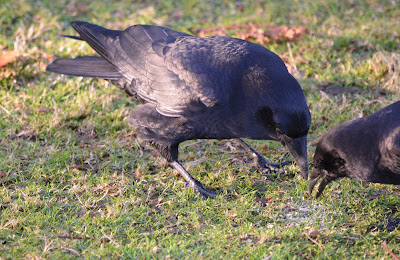 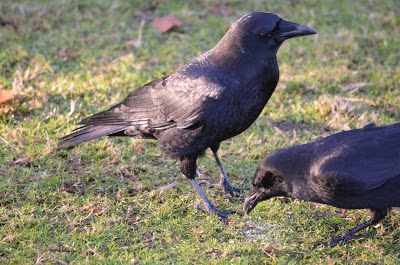 Here the rabbit is waiting for the crows to finish, but neither seems worried about the others presence. 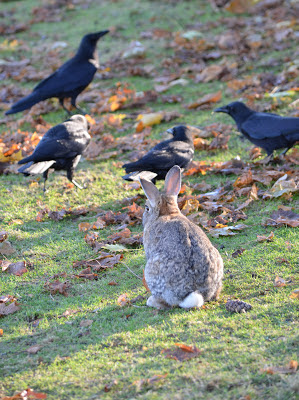 I watched a crow in a parking lot in the Grand Canyon: each new car that parked was checked out by the crow who cleaned up all the freshly squashed bugs on the front grill of each one. It was facsinating, the crow seemed to know which order the cars came in and ``attended`` to them accordingly. 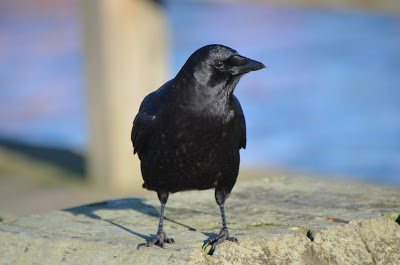 These pictures were taken close to the beach, a source of mussels and other shells, which the crows drop
onto the road to open; if that doesn`t work they seem to drop them in the path of an oncoming car, hoping the car wheels will free the tasty morsel inside. 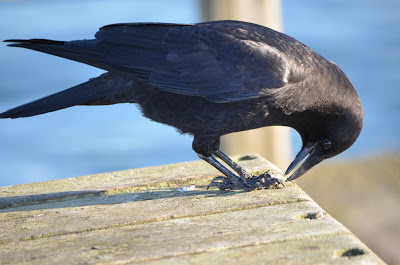 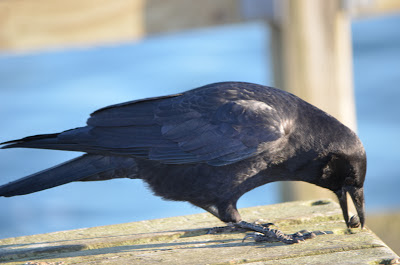 A young crow (I think) doing some grooming: 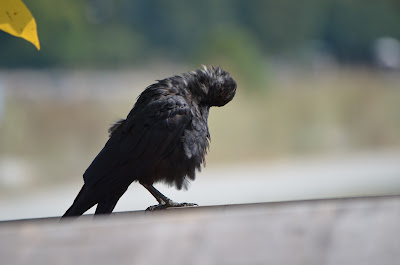 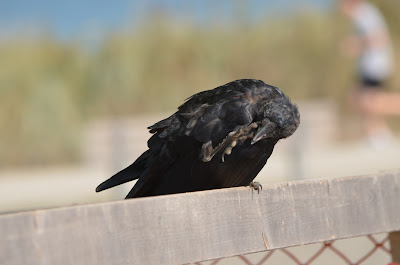 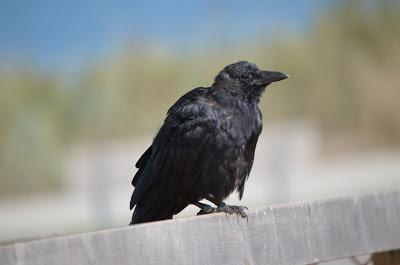 At the end of the day, unless they are nesting, the crows head to one of several large roosts for the night. On a summer evening  I have watched hundreds fly past as the light starts to wane.

Crows do not like eagles or hawks in their territory, as a group, or murder, they chase the raptor mercilessly usually resulting in the raptor leaving the area.

A painted a bird this week, but sad to say not a crow. This is a watercolour of a house finch called "Winter Colour": 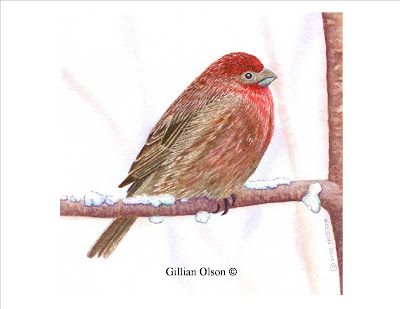 Gillian Olson
I was born on Guernsey (Channel Islands) but have lived in Vancouver, BC most of my life. I have always loved art and the creative process and now that I am retired (after over 30 years working in health care) I have time to devote to my passion. My love of nature and architectural whimsy are reflected in my art. I am also a foodie; I love to cook from scratch using homegrown and local ingredients and enjoy a glass of good wine. I balance my life with swimming, walking and I get outside to enjoy our beautiful west coast every chance I get.